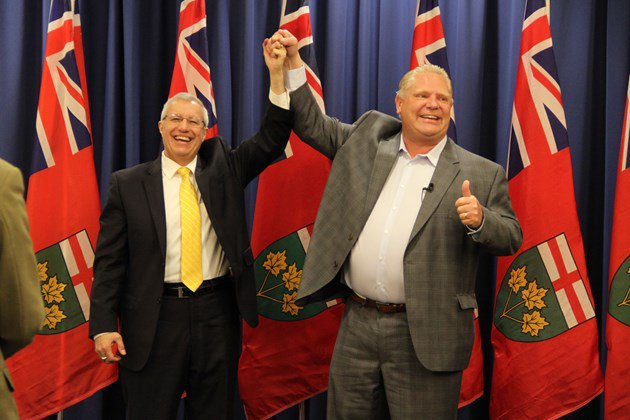 Nipissing MPP Vic Fedeli (left) will be the PC Party's candidate for the Nipissing riding in the next election. (Photo supplied by Victor Fedeli, Facebook)

Nipissing MPP Vic Fedeli will be the Ontario Progressive Conservative Party’s candidate for the 2022 provincial election.

Fedeli announced via social media over the weekend that Premier Doug Ford had acclaimed him as the party’s representative for the Nipissing riding.

It will be the fourth provincial election that Fedeli will take part in.

“I’m excited for the opportunity,” Fedeli said in an interview with Moose FM. “I’ll look forward to the opportunity to return for hopefully another four years.”

Fedeli joined provincial politics after serving two years as the Mayor of North Bay. After winning his first provincial election in 2011, Fedeli was appointed the Energy Critic for the PC Party which was the Official Opposition at the time.

Fedeli says that being a member of the opposition was challenging after coming from nearly a decade in municipal politics.

“It was a difficult adjustment. I was in opposition for six and a half years and I would have traded that job in to be mayor again any day,” he joked.

After serving as a member of the opposition, Fedeli was named to Doug Ford’s cabinet when the PC Party took power in 2018, currently serving as the Minister for Economic Development, Job Creation and Trade.

Fedeli believes that he has been successful in achieving his original goal of bolstering the voice of North Bay at the provincial level.

“I felt like Queen’s Park was bringing its opinions to the north rather than the north’s desires back to Queen’s Park,” he said. “Right now, I think it’s very clear that the desires of the north are heard at the cabinet table.”

Fedeli has lived in the North Bay area his entire life, first starting a business that he sold in the 1990s, serving as mayor and now approaching a decade of service at the provincial level. He says that he will continue to advocate for the area because of the greatness he sees in it.

“We live in paradise, we really do. Yes, there are issues that we have and challenges that we’re working on every day. But when you pull back and see where we live – that you can walk out of your house or walk down a government dock and throw a fishing line on your lunch hour – we are really in a slice of paradise,” he finished.

The next Ontario General Election will be held on or before June 2, 2022.