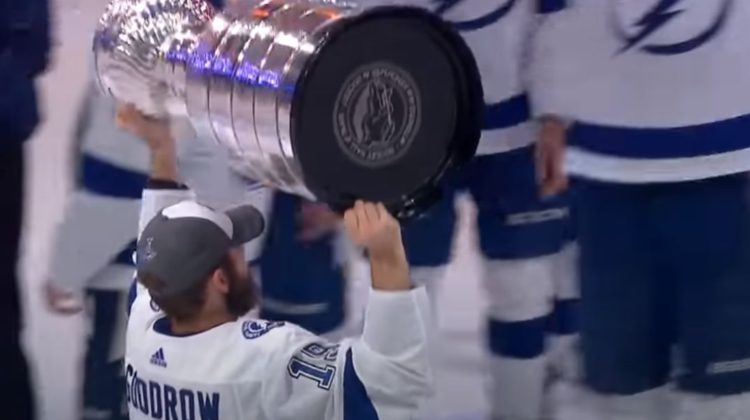 Goodrow was the first captain of the Battalion when they moved to North Bay in 2014. At the time, it was his fifth and final season with the troops, suiting up in at least 60 games every year he played.

In his OHL career with the Battalion, Goodrow amassed 127 goals and 102 assists for 229 points in 313 games played. His 1.06 points-per-game throughout his career is the second-highest rate in franchise history (Matthew Struthers is first).

In the Battalion’s first season back in North Bay, Goodrow was the leading scorer during the regular season with 33 goals and 67 points. He also led the Troops in playoff scoring with 24 points in 22 games as the Battalion fell to Guelph in the OHL Finals.

Goodrow was traded to the Tampa Bay Lightning from the San Jose Sharks midway through the 2019-20 season. Goodrow was only able to suit up in eight regular-season games with Tampa prior to the pandemic.

In the playoffs, Goodrow played in all 25 of Tampa Bay’s games, scoring a goal and five assists. He spent most of his time as a depth player on the offensively-gifted Lightning but still managed to average over 18 minutes of ice time per game in the playoffs.

In the dying seconds of Game 6, Goodrow blocked the final Dallas shot and was able to clear the defensive zone, securing the win for Tampa Bay.

Goodrow is the first former-Battalion player to win the Stanley Cup. He now heads into the offseason as an unrestricted free agent.

Congrats @bgoodrow23 ! You will forever be our Captain. Thank you for inspiring all young athletes with your determination, hard work & believing in yourself. We could see the magic @OHLBattalion @OHLHockey https://t.co/r7z7UuufvO