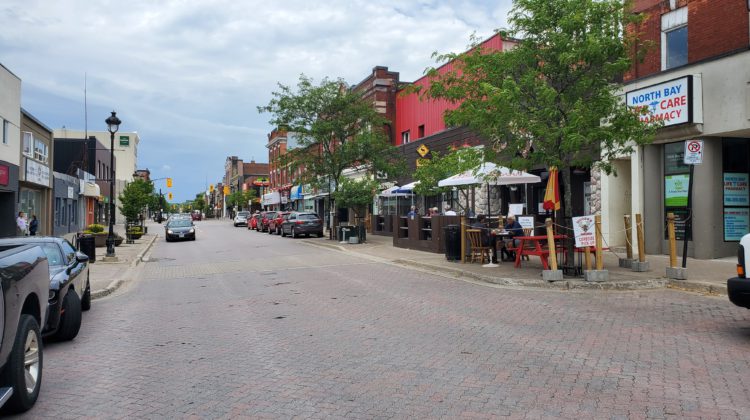 Partners of a downtown business gave a presentation to council citing their concerns for their safety and future of their business due to run-ins with homeless people. (Photo by Brad Aubin, MyNorthBayNow.com staff)

A pair of business owners do not feel safe in their new downtown location, as they indicated to North Bay city council in a presentation during Tuesday’s meeting.

Jane Kelly and David Barrie recently opened a fitness studio on Main St. and cited numerous run-ins with homeless people, many of which have resulted in police being called.

Jane Kelly’s father, Jim, was instrumental in building the downtown core in the 1980s, with a plaque honouring his contributions to the city. Jane believes that her father would not be happy with the city’s current state.

“I’m thankful that he is no longer with us because what he would see now in our downtown would make him very sad,” Kelly said in a written statement to council.

Kelly says that she has seen people using drugs, urinating and yelling obscenities around her downtown business location.

“I’m scared. This city is like an episode of the Walking Dead,” she said.

“How is city hall property any different than the streets of downtown?” Barrie questioned, adding that the streets of the downtown core should be receiving the same treatment as city hall in regard to homeless people.

Both Kelly and Barrie also said that they have been in contact with police, going so far as to speaking with chief Scott Tod. During the talks, both say that police have assured them that officers are patrolling the downtown core, but add that they seldom see police in the area unless they are called for an incident.

Kelly recently moved back to North Bay after spending 34 years working in the social services in Ottawa. She says that while there is a homeless population in Ottawa, they are not as violent and belligerent as she has noticed in North Bay.

Following the presentation, councillors were understanding of the concerns brought forward by Kelly and Barrie.

Mark King and Scott Robertson questioned Kelly about her experience in Ottawa, wondering what was being done that could potentially be replicated in North Bay. She suggested a heavier police presence in the downtown area, perhaps with a community initiative.

Councillor George Maroosis, who is on the same plaque as Jim Kelly, was quick to point out that it’s unfair to compare Ottawa to North Bay. He cited an initiative in Timmins where its police service assigned a designated foot patrol officer to create relationships with the people living on the streets of the downtown area.

Councillor Dave Mendicino suggested an increased presence of Boots on the Ground; a community organization that helps the homeless in times of crisis.

Barrie indicated that it may not be enough, saying that some of the other businesses in the downtown area are contemplating adding private security.

After the question period of the presentation, Mayor Al McDonald had the final word.

“Every individual on this council is touched by this issue. Please know that this is a topic that is in constant conversation within our council and within our community,” he said.