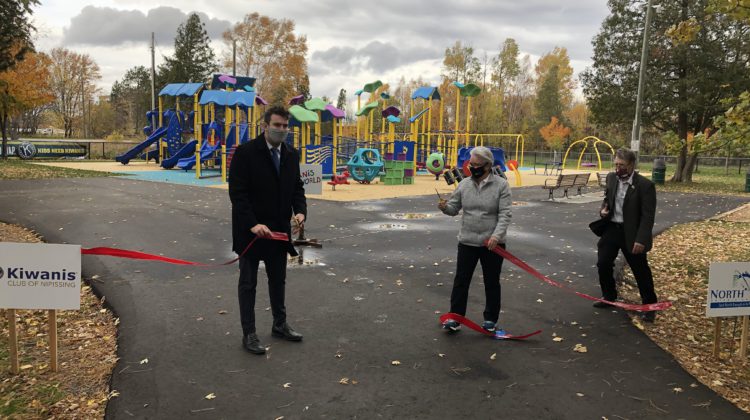 Past and present members of the Kiwanis Club of Nipissing were on-hand for a ribbon-cutting ceremony taking place at the newly-built playground on Memorial Drive.

Kiwanis Playworld features an accessible play area that is able to accommodate children who have a physical disability. There are also designated quiet zones for children with autism.

The play area is adjacent to a fitness area that is open to all ages. The idea is that parents and guardians can stay active while their children are able to play.

Liam Sangster, President of the Kiwanis Club, says that the organization wanted to offer something for everyone.

The Kiwanis Club built a playground in 2007, but Sangster says that the old playground was not accessible, so the plan was hatched to build a more inclusive facility.

“I’m actually quite proud. Seeing members of our community, they’re quite shocked that we have such a nice playground in our small city,” he said.

The whole project cost $533,000, which was raised through fundraising efforts done by the Kiwanis Club, funds from the City of North Bay and community donors.

Margaret Thomson’s family donated $10,000 to the facility, and she says the decision to do so was easy.
“Knowing that North Bay has another place for families to gather together and play outside, it was a no-brainer,” she said.

“It absolutely warms the heart. It’s great that families will be able to play together at all different skill levels,” Thomson added.