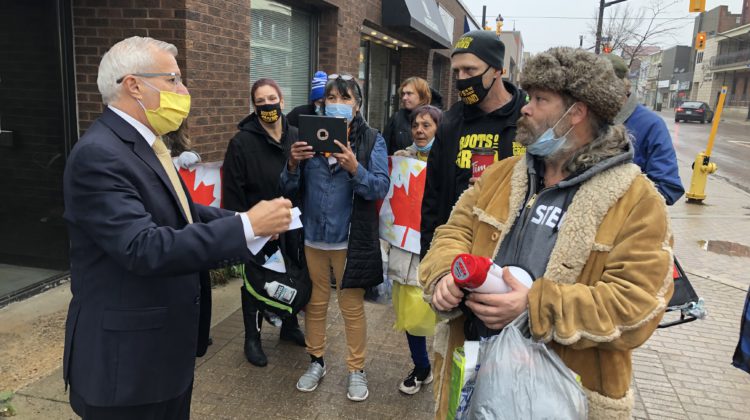 A group of homeless activists who organized a march through the downtown core were greeted with some positive news during one of their stops.

The march was organized by Boots on the Ground and Nighthawks Neighbourhood Watch, both of which homeless activist Shane Moyer is involved in.

“We need housing and we need it now to get our people off the street before the snow comes,” Moyer said while picketing outside Nipissing MPP, Vic Fedeli’s office. “We still have well over 100 people still on the street. Even with the new addition to the low-barrier shelter, it’s been full every night since it’s been in place with an overflow of at least 68 or more.”

Fedeli’s constituency office on Main Street was the second stop for the march after beginning at Nipissing-Timiskaming MP Anthony Rota’s office. While outside, Fedeli came out to greet the marchers, announcing the province’s $4.2 million investment into the District of Nipissing Social Services Administration Board (DNSSAB).

“My role as MPP would be to listen to the needs of the people, listen to the organizations who are applying for funding, then I go to Toronto and fight for it,” Fedeli told the media outside of his office.

Friday’s $4.2 million is in addition to the over $5 million the province has invested into addiction, homelessness, and social services in the city over the past few months.

Despite an increase in homelessness in the city, Fedeli remains confident that the money is being spent properly.

“I would say it’s been used judiciously. The $1.2 million has something very tangible with that,” Fedeli said in reference to the low-barrier shelter on Chippewa St.

Moyer says that he has had a number of talks with the city about the homeless resources, but thinks that a disconnect remains.

“The homeless numbers that they’re saying versus the numbers we have on the street do not collaborate at all,” he stated.

The march was attended by people who are homeless as well as those who help them. Kate Valiquette, the owner of H.O.P.E’s Kitchen, which provides meals and outreach to homeless people, joined the march in support of the cause.

“I think it’s important for people to realize that they’re here and they’re not going anywhere and that the problem is still ongoing in the city. Unless we start getting more resources, getting affordable housing and getting more support services in here, then we’re going to continue seeing the same problem. We’re going to continue to see the downtown core suffer and the city will continue to suffer,” Valiquette said.

H.O.P.E’s (Helping Our People Eat) Kitchen was opened earlier in the year by Valiquette and her husband, who also owns a towing business in the city. Valiquette says that she has continued to see new faces who come to her restaurant.

“I see a tremendous amount of people on a daily basis that really just need the extra support and I don’t think they’re getting it from the resources that exist,” she noted.

The issue of homelessness has come to the forefront in recent weeks following a “tent city” demonstration outside of City Hall organized by Moyer, and a presentation to city council from two downtown business owners concerned about the homeless population.