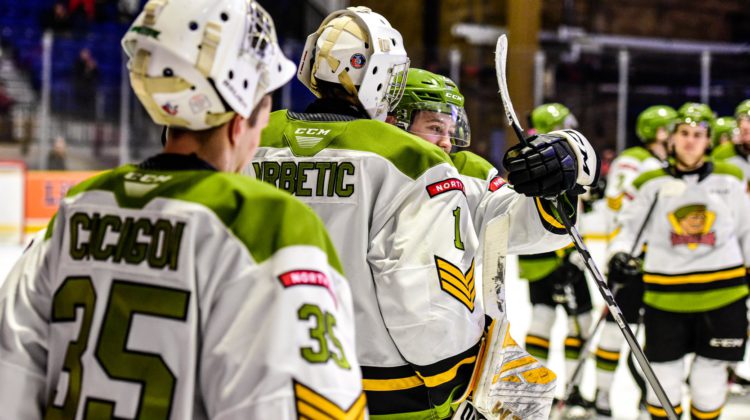 Joe Vrbetic and Matvei Petrov are the lone Battalion players to be named to the NHL's Players to Watch list for the 2021 draft. (Photo supplied by North Bay Battalion, Facebook)

Joe Vrbetic and Matvei Petrov will have some eyes on them this season.

The Battalion players have both landed on the NHL’s Players to Watch list, which grades players who are eligible for the 2021 draft with a rank of ‘A’, ‘B’ or ‘C’.

Vrbetic is coming off his first season as the clear-cut starting goaltender for the Battalion. In 42 games, he posted a 4.23 GAA and a .881 save percentage along with two shutouts while facing the sixth-most shots of any goaltender in the league.

Adam Dennis, General Manager of the Battalion, says that his goaltender has the potential to raise his draft grade this season.

“Last year, for lack of a better term, we threw him onto the fire,” he said. “Joe learned what it takes to be a starter in the league and what it means to work hard in practice. I think you saw that correlation between his practice habits that transformed into positive game results later in the year.”

Matvei Petrov was the Battalion’s first overall selection in this past year’s Import Draft and is being named a Player to Watch despite not yet playing an OHL game. Petrov has been a point-per-game player when he suits up for the Russian national team, most recently scoring nine points in nine games at last year’s Under-17 World Championship.

“He’s been one of the top scorers with the Russian program nearly every year,” Dennis commented on Petrov. “He has been playing with his local team in Russia so he’s been able to stay fresh and obviously he’s had a few eyes on him as well.”

Vrbetic and Petrov were the only two North Bay players to be named to the Players to Watch list, but the team has a handful of draft-eligible players this season.

Avery Winslow, Kyle Jackson, Paul and Alex Christopoulos and Ty Hollett will all be eligible for the 2021 draft. Dennis believes that if it weren’t for the pandemic disrupting the usual hockey schedule, he would have more players on NHL scouts’ radars.

“We felt like we could have snuck into the playoffs [last season] and it would have been on the backs of a lot of good young players,” Dennis said. “I think if they were able to play those games in a regular season, we would have some more players on that list.”

The OHL season is scheduled to begin on December 1, with training camps slated to open on November 15.