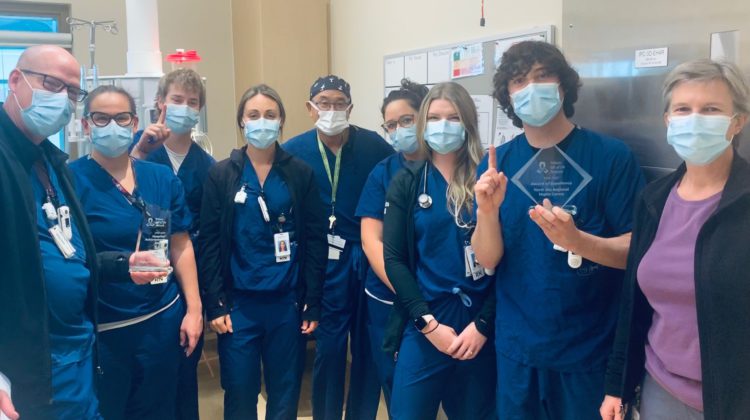 The North Bay Regional Health Centre (NBRHC) has earned some hardware for its efforts in organ donations.

The hospital has been recognized by the Trillium Gift of Life Network (TGLN) with two honours. For the fourth straight year, the NBRHC received the Provincial Conversion Rate Award.

“It was quite an honour as an organization to receive that award four years in a row,” said Janis Herzog, Clinical Nurse Educator in the Critical Care Unit and Clinical Support Lead for the TGLN.

The Provincial Conversion Rate Award is given to hospitals that are able to successfully provide the organs and tissue of eligible donors to a recipient. The provincial target rate is at 63 percent; the NBRHC’s rate was 100 percent.

Last year, the hospital made 300 calls to the TGLN for tissue donors, resulting in 18 donations. There were also 64 calls made for organ donations, which led to three donors from the area resulting in six transplants for hearts, lungs or kidneys.

In honour of four straight years of winning conversion rate awards, the NBRHC also received the TGLN Award of Excellence for the first time. It was one of nine hospitals in the province to receive the award.

Herzog says part of the reason for the hospital’s accolades is due to the North Bay community. 58 percent of eligible residents in the area are registered to be an organ or tissue donor, which is the highest rate of any community in the province.

“It’s so impressive that we have a great community who have registered to be a donor,” Herzog applauded.

In Ontario, residents 16 years of age and older have to opt-in to becoming an organ donor when they die. Herzog says there is still some hesitancy for people to become organ donors due to some gaps in public education on the topic.

“When families and healthcare workers understand what the process is all about, it makes a lot more sense to them in realizing how humane of a process this actually is and what the outcome means to families and those receiving organs and tissue,” she said.

While it is sometimes difficult to receive an organ donation, Herzog says those who do receive transplants are given the “gift of life”.

“A lot of these people who are receiving organs will not live if they do not get a new one. For someone to get a new heart who is on ICU and is on a ton of machines to keep living, a new heart means they get to go on and perhaps see their child walk down the aisle and get married, or seeing a new grandchild walk for the first time,” she finished.