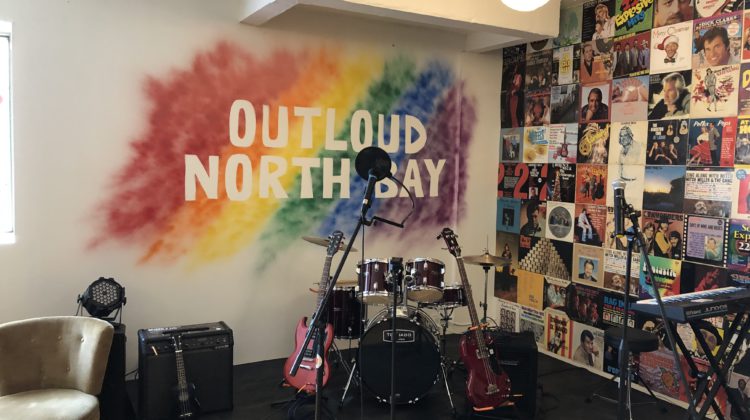 OutLoud is looking to move from its location on Ferguson st. after seeing rapid growth in its first three months. (Photo by Greg Bowman, MyNorthBayNow staff)

OutLoud North Bay is looking to expand after just three months of being open at its Ferguson street location.

For Seth Compton, the owner of OutLoud, it marks nearly a year of putting together a vision he had for the community all while preparing and undergoing a life-changing procedure.

Nearly one year ago, Compton took part in a vigil for Transgender Day of Remembrance in North Bay. While there, he was struck by the number of people who expressed their dismay at the fact there was no safe community space for those identifying as 2SLBGTQ+.

“After I went home and cried it out, I was like ‘I need to build something’,” he recalled.

From there, Compton began looking at spaces to rent to provide a haven for kids to take part in activities and meet new people. He was given the keys to his current location on Ferguson street in March but had to hold off on the opening until August. Since then, Compton has seen a significant increase in traffic.

“Since I’ve opened the space full-time at the beginning of August, I’ve tripled in numbers,” he said.

Compton and the volunteers at OutLoud are now looking to relocate into a larger location in order to accommodate more people. Despite local health guidelines allowing gatherings of up to 50 people in a place of business, Compton says his current space can only safely hold about 25 people.

“It would break my heart if I had to start turning kids away at the door. Right now, this space means a lot to kids,” he noted.

Compton is looking at the old Summit bar near the Voyager as his next potential location, which he figures would be eight times larger than his current one.

“It would give me an opportunity for growth and then not having to move again for a while,” he said.

The growth OutLoud has seen so far is largely due to Compton’s outreach. He has been working with the Near North District School Board to provide students with information about what OutLoud has to offer.

While he’s not surprised with what the community has done for OutLoud, Compton can’t help but wonder what the growth would have been like if the pandemic didn’t happen.

“I’m not surprised. I think without COVID, we would have been very successful very quickly. COVID is making me work for every dollar,” he said.

The rapid growth of OutLoud has also coincided with a major life change for Compton. Around the time when he decided he wanted to open the safe space, Compton also decided to undergo a transition of his own.

After months of hormone treatments, Compton scheduled a double mastectomy with a nipple graft, also known as a “top procedure” for those transitioning. The surgery was originally supposed to take place in the spring, with the pandemic delaying it until October.

In the month leading up to the procedure, Compton had to stay in quarantine before eventually travelling to Montreal for the surgery. During all of this, Compton documented each step of the journey on OutLoud’s Facebook page.

“I have a lot of kids here who are transgender that are high school-aged,” Compton explained. “I have a lot of parents who come to me for advice. I’m still new to this journey and I’m a lot older than their kids. It’s something they look forward to and ask that I share those things.”

With his dream for a safe, inclusive space coming to fruition at the same time he underwent a life-changing surgery, Compton says the last year has been “an emotional rollercoaster ride.”

Compton says he’s in the process of turning OutLoud into a non-profit organization to become eligible for government funding. The bulk of the operating costs have come through community donations and partnerships, as well as some of Compton’s own savings.

OutLoud currently has a GoFundMe page with the goal of raising $41,000 to move to a new location. He wants to raise enough money to rent a space for a year while he can put together a sustainable operation.