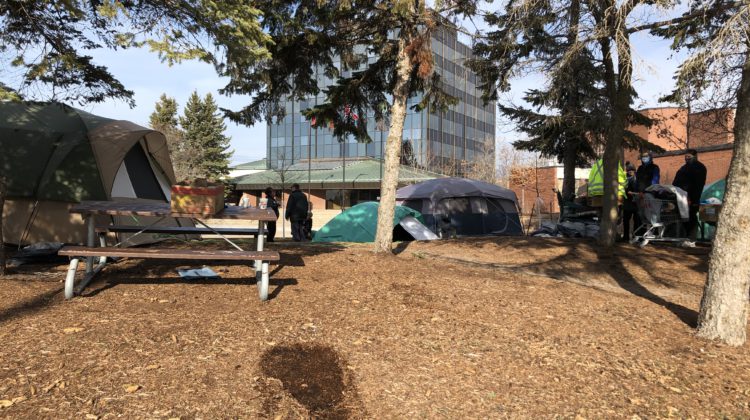 The second 'tent city' which has been set up outside of City Hall by the area's homeless population. (Photo by Greg Bowman, MyNorthBayNow staff)

The District of Nipissing Social Services Administration Board (DNSSAB) wants to notify the public of what services are available to those on the street.

King notes, however, the Crisis Centre’s clientele can bring up some challenges when people simply need a place to sleep.

“That’s one of the tough situations when you’re dealing with families at an establishment like that,” he said.

If the Crisis Centre is full, King says the staff will connect people with a hotel room using overflow funding supplied by DNSSAB.

For those who do use the services, King stresses that there are rules in place.

“There’s a number of pretty standardized rules. You can’t be in the facility and videotaping individuals that are there or the workers,” he explained, adding there are also general rules for behaviour. “I’ve heard stories of what went on in the low-barrier shelters during the summertime and there were damages done and failure to cohabit with others that are there and police get involved.”

Homelessness in North Bay has been at the forefront of the community for the past few months, with demonstrations being performed by activists. There have been two separate ‘tent city’ protests on the lawn of City Hall, along with a march through the downtown core in October.

King and DNSSAB assure that help is on the way for the area’s homeless. The low-barrier shelter on Chippewa Street will be getting 36 transitional housing units in addition to the existing warming beds already in place. King says the facilities are currently being built and should be available by the spring.

In addition to the Chippewa Street site, which has been largely funded through the provincial government, King says there’s a possibility of permanent, geared-to-income housing coming to the area.

King says DNSSAB has applied to a federal program that he hopes will lead to the building of long-term low-income housing. The federal government’s Housing Supply Challenge is a $300-million project that aims to fund housing solutions in communities across the country.

King did not say which program the board was applying to, but is confident that the area could receive some funds.

“Given the situation we have here, I wouldn’t be surprised if we were the recipient of those federal dollars,” he stated.