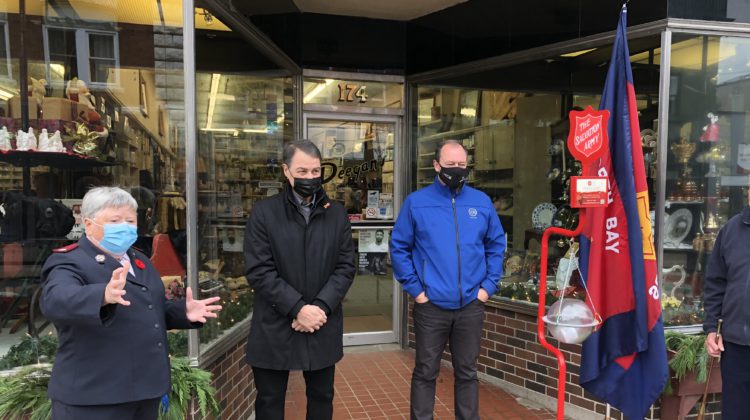 The Salvation Army’s annual Christmas Kettle Drive will continue its long-standing tradition in North Bay this year with some slight modifications.

Members of the Salvation Army along with area dignitaries officially kicked off the campaign on Friday outside of a downtown business.

Major Bonita McGory, Corps Officer for the Salvation Army says this year’s Kettle Drive will feature a “tap” machine for five-dollar donations along with the usual cash donations.

“There’s no information stored in the machine. You can still use the machine even with nobody standing there,” McGory told the media at the kickoff.

In lieu of COVID-19, McGory says the Salvation Army will be modifying its hours for volunteers to stand with the kettles to ensure safety.

“Our objective first and foremost is to keep everybody safe,” she affirmed.

On hand at the kickoff was Nipissing-Timiskaming MP, Anthony Rota, who supplied the year’s first donation.

“It was an honour to put that first donation in,” Rota said.  “Everybody deserves to have a good Christmas and I encourage everyone to help the Salvation Army by making that donation.”

Mayor Al McDonald was close behind Rota, submitting a donation of his own.

“Anything we can do to help those individuals that need our help the most, I think that’s a great benefit,” the mayor said. “Our citizens are the most generous people on the planet.”

Last year’s Kettle Drive raised $243,000, all of which stays within the North Bay community. McGory says the need for the Salvation Army’s services is rising, with its food bank servicing 50 families a week, as well as providing over 450 bagged lunches for school children.  The goal for this year’s fundraiser is $250,000.

Kettles will be set up at Sobeys, Your Independent Grocer, Metro, Walmart and the LCBO on Algonquin Avenue.

Donations are also being accepted online by clicking here. Be sure to select North Bay to donate to the local branch.