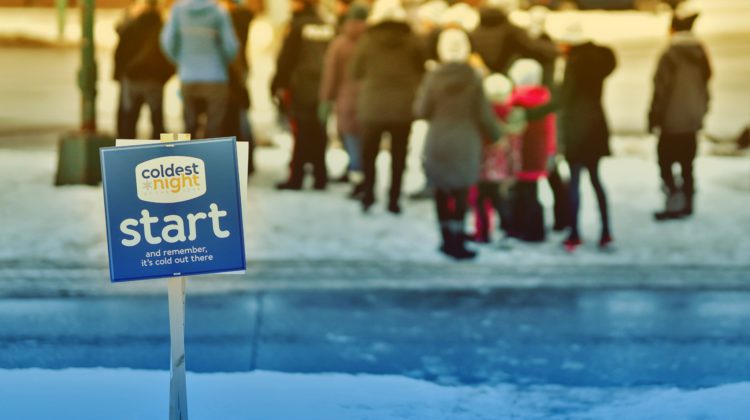 (Photo supplied by Coldest Night of the Year, Facebook)

The annual Coldest Night of the Year fundraising walk has exceeded its fundraising goal one day ahead of the event.

North Bay’s goal was to raise $35,000, which passed on Thursday. All money raised goes directly to The Gathering Place.

Dennis Chippa, executive director of The Gathering Place, says organizers of the event took the pandemic into consideration when coming up with the fundraising goal.

“This is a difficult time for people financially,” he noted.  “We set our goals really low, much lower than we had thought, and of course, the community responded.”

With donations still rolling in, Chippa anticipates over $40,000 will be raised.

“I’m never not astounded by how this community rolls,” he said.

This year’s walk will have more participants than last year, with 158 walkers as part of 31 teams.

Chippa says he was surprised more people signed up for the walk, adding the lockdown likely played a role.

“This is a way for people to get out of their house,” he said.

It comes as The Gathering Place continues to serve a high volume of people, with 1,400 meals served from February 8 to 14.

“I think folks know what we’re doing. I think a lot of folks appreciate it. I think more importantly this year, we saw far more people that we had never seen before,” Chippa said, adding that many of the new people are likely locals because of the lockdown.

On Saturday evening, Chippa will be holding a small ceremony which can be followed on The Gathering Place’s Facebook. As participants embark on their walks throughout the night, he will be posting regular updates to the page.

For those who are not walking, Chippa is urging everyone in North Bay to leave a light on at the front of their house beginning at around 6 pm Saturday.

“We want to light up the night to identify the hungry, hurting or homeless in the community,” he said.

Donations are still being accepted for the fundraiser and can be made by clicking here.