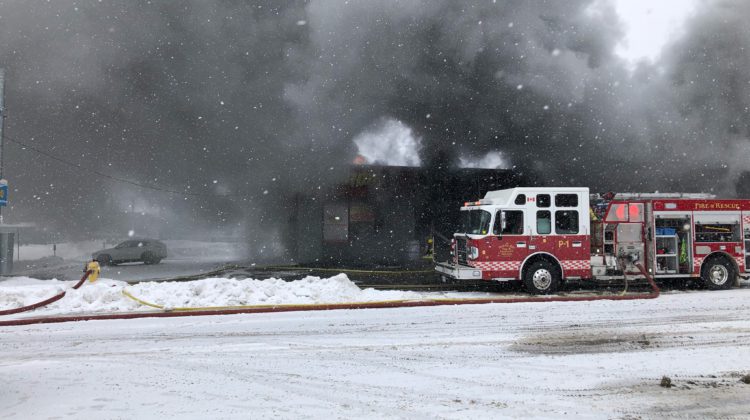 The scene on the corner of Main and Fisher Streets in downtown North Bay where the Midas auto shop caught fire Monday morning. (Photo by Greg Bowman, MyNorthBayNow staff)

A fire at a North Bay business this morning has led to two people being taken to hospital.

Lucy Hannah was shovelling snow on Main street Monday morning when she heard a loud noise from the nearby Midas auto shop.

“I heard a big bang in the first bay, it exploded, then another two. I saw two men come out with no shirts on and they looked like they were burnt,” Hannah said at the scene of a fire on the corner of Fisher Street and Main Street.

Fire crews were called to the scene at around 10:40 Monday morning.

“We had heavy black smoke visible from the station,” fire chief Jason Whiteley told reporters at the scene. “We went into a defensive attack mode.”

Two people were taken to hospital for treatment of injuries, Whiteley confirmed.

With the fire being in an auto shop, Whiteley says it poses challenges for firefighters.

“With the amount of hydrocarbons contained in a motor vehicle repair shop like this, it’s extremely dangerous. The fire can really take off on us,” he said.

Patsy Oneil, co-owner of the Midas shop, says it was a morning like any other at her business. She had stepped out for a few minutes when the incident that injured both her son and husband happened.

“They were doing their job like always. Like we do every day,” an emotional Oneil told reporters. “This is just a business. Their life is more important.”

Oneil says her son and husband were working on a gas pump of a vehicle when the incident happened, adding she does not know what caused the fire.

Whiteley confirms no other buildings in the area were affected by the fire. The cause of the fire is still under investigation.


Traffic going both directions on Main Street between Fisher and Sherbrooke Streets has been blocked off. Fisher Street traffic has also been blocked off at McIntryre street and Oak Street.

North Bay Hydro has confirmed that a team was also called to the scene of the fire to “remove the presence of electrical energy” to ensure the safety of everyone in the area.

“We are keeping those affected by this morning’s incident in our hearts,” stated Neil Russell, communications officer for North Bay Hydro.