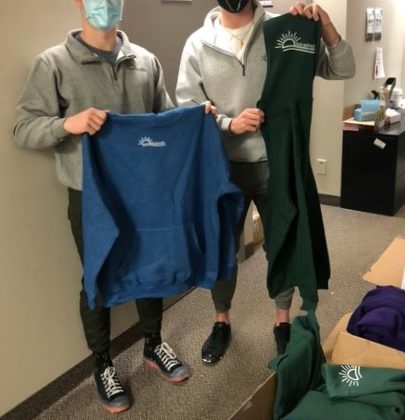 Nearly 100 people will be warmer this winter thanks to 19-year-olds Kobe Seguin and Adam Kennedy. (photo provided by Nipissing Mental Health Housing and SUpport Services)

The agency says that they will be distributed through their downtown outreach and emergency shelter programs.

The clothing comes from their business, Bay Apparel, which the two launched this past summer.

The company has sold out two of its limited-edition clothing collections for both Fall and Winter.

Sequin says his business has chosen to support local causes with each production run.

“We thought it would be a great idea to give back to the community,” said the young man.

Mary Davis, NMHHSS CEO, says they are grateful for the pair and their efforts to help the vulnerable people.

“While temperatures are milder than they were during the recent cold snap, it’s still winter and any donation of clothing that our clients can wear as an extra layer is welcome,” she said.