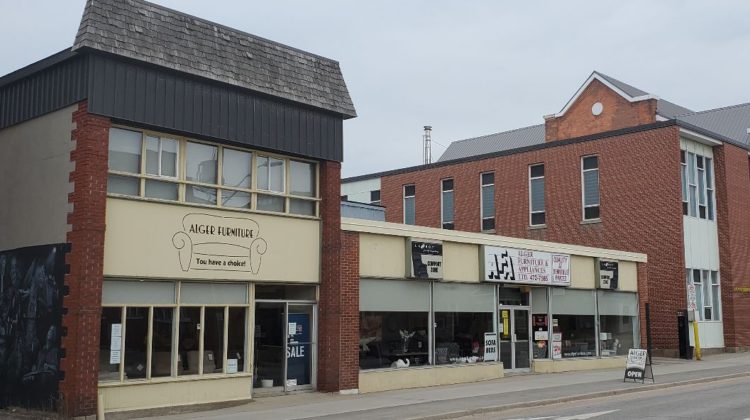 There are family businesses, and there are business families.

Alger Furniture and Appliances may be celebrating its 35-year anniversary, but the Alger family name has been in North Bay’s business community for over a century.

Ian Alger, General Manager of the furniture and appliance store on McIntyre Street, says his great grandfather started an electrical business in North Bay in 1913.

“Their phone number was three digits. No area code,” Alger said with a laugh.

The following two generations of Algers continued on a similar business path, going from electrical repairs to supplying equipment.

“It’s hard to believe an incarnation of this business has been around since before the first world war,” said Ian. “Thinking about how far we’ve come, how much the city has grown and how the business has evolved over the years. It’s pretty amazing.”

For Ian, who has been working at the store since 2001, the family business was not his first choice. Studying biotechnology and math in college and university, the fourth-generation Alger had intentions of working in science.

“Circumstances always brought me back here to the family business,” he explained. “I eventually learned to be more appreciative of the history in that not a lot of families are able to stay in business or are able to maintain a connection to business as long as this family has.”

When the global pandemic hit a year ago, Alger’s store was deemed an essential business as it sold appliances. Once the store was able to welcome people back in after the initial spring lockdown of 2020, Alger says business began to take off.

“We’ve seen a lot of clients returning seeing as they can’t travel. They’re upgrading their living room, upgrading their kitchen. But we’ve also seen traffic from clientele we haven’t had before looking to support local and coming in for the first time,” he said. “It’s been amazing considering there’s a lot of people out there who are not doing well. It’s nice to be able to provide for the community.”

Being in business for over three decades, Alger says one of the keys to success is to adapt to an ever-changing business environment.

“Listen and pay attention to the clients,” he noted. “Keeping up with people’s needs, keeping up with what’s going on in the world and adjusting your tactics to fit the changing the landscape is really what’s allowed us to do well and thrive over the last 35 years.”

“After being around for this long and still being able to thrive in a world where big box rules the landscape…it’s nice to be that independent family business standing on our own two feet,” Alger continued.

Today, Alger Furniture and Appliances is still operated largely by the family. Ian’s father, Bob, remains in “the big seat”, while his brother Jason has worked alongside him for nearly 20 years. Now with families of their own, the fifth generation of Algers have begun helping out as well.

“I’m appreciative of the fact we’ve been able to stick around this long while other businesses have gone by the wayside,” commented Jason Alger. “It’s an appreciation of the effort of my family over generations in building this business. And it’s an appreciation for the community who have allowed us to stay in business all this time.”