OutLoud permitted to open during lockdown 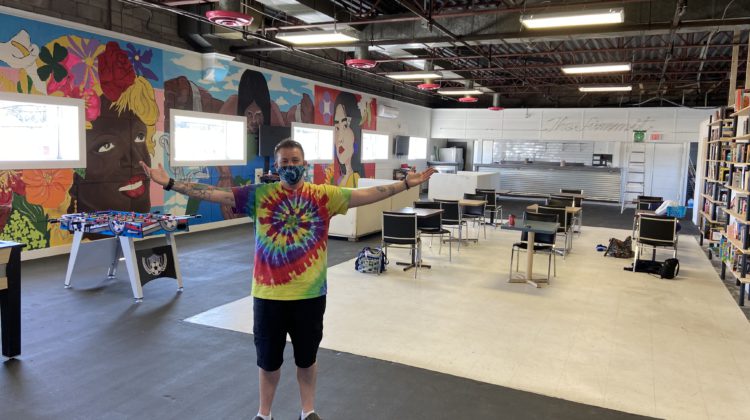 Seth Compton has been tirelessly working for the past month renovating the old Summit nightclub into OutLoud’s new space.

Just a day after he opened up the new location to his membership, Ontario was sent back into a month-long lockdown.

“At 2:30, my gut kind of sank because we had been working around the clock to get open,” Compton said Wednesday afternoon, an hour after Premier Doug Ford’s announcement.

“Whether it’s eight kids or whatever. They need that social interaction. They need to be around people, especially the ones who are struggling with mental health. To have them stay at home for another 30 days after what we’ve been through this year…it brings some emotions,” he said, fighting through tears.

For the past year, Compton has welcomed the youth of the community to OutLoud. It’s a safe space for 2SLGBTQ+ kids to come after school and socialize, get a meal or a snack and unwind. 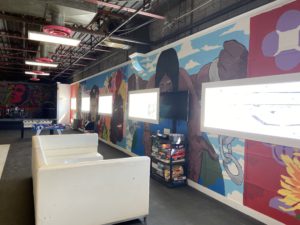 Windows had to be cut out of the old Summit nightclub walls for OutLoud’s new space. The wall also features murals of George Floyd, Indigenous artwork and 2SLGBTQ+ activists. (Photo by Greg Bowman, MyNorthBayNow staff)

OutLoud initially opened its doors last August at its last location on Ferguson Street. Now, it has moved into a space that is about seven times larger at the Voyager Inn.

Compton says he and a group of about 15 people worked “day and night” for the past month renovating the old nightclub. That included clearing debris, repainting and cutting out windows in the wall.

A portion of the renovations, Compton says, were done at cost by a construction company that offered to help out. Fitness equipment was also donated by Canadore College and Nipissing University, along with musical instruments from Long and McQuade.

Despite that, Compton figures he’s spent about $80,000 of his own money on OutLoud in the past year.

“It’s money I had, and it’s money that I’m going to continue to spend because this is where my heart is,” he said.

Compton is working on turning OutLoud into a registered charity, with the application now “under review”.

While Compton has worked to keep his vision going, he’s noticed the impact OutLoud has had on the community and its youth. He says local hospitals and school boards have reached out to him for advice on how to be more inclusive in their respective treatment of 2SLGBTQ+ people.

“Whether it’s gender expression, gender identity, sexual orientation, proper pronoun usage, it’s all coming together and my kids are putting those presentations together for adults,” Compton said. “It’s crazy to see how comfortable some of them are in their own skin.”

Compton is waiting to hear from the North Bay Parry Sound District Health Unit on if he’s allowed to open OutLoud during the lockdown, hoping he can offer services in some capacity given kids will be on spring break next week.