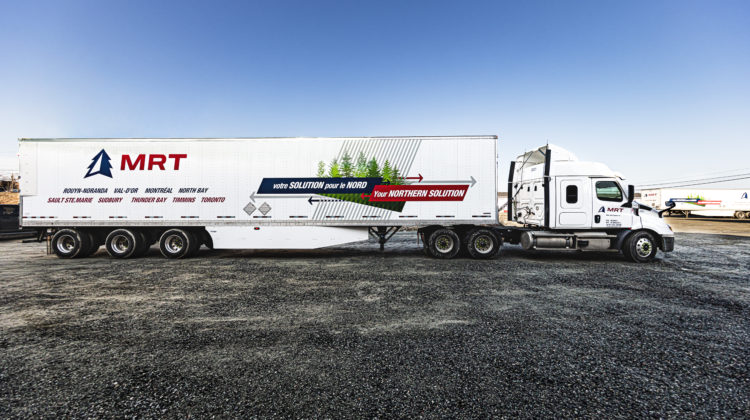 It’s one of six new terminals being built in Ontario, with stations going up in Toronto, Sudbury, Timmins, Thunder Bay and Sault Ste. Marie.

Johanne Valence, Media Relations Manager for MRT, says North Bay has been the company’s “main” Ontario terminal for the past eight years.

“North Bay is really a pull attraction for us because it’s not so far from Abitibi Témiscamingue (Quebec) which is our head office but it’s also not so far from Montreal and Toronto,” she said.

MRT is a transportation and logistics company that began in Quebec 22 years ago and has since expanded to Ontario. It employs just over 100 drivers and about 100 other staff.

With more terminals opening in Ontario, Valence says more jobs will be needed in North Bay to accommodate the increase in logistics.

“If you want to work for us…we will find a job for you, it’s no problem,” she noted.

MRT’s current location is on Highway 17 and will be moving to Station Road off Seymour Street as part of the company’s expansion. Valence says the new terminal should be completed by the summer.

“The strategy to develop the territory of Northern Ontario in sync with the territory of Quebec makes sense, it allows us to optimize and thus reduce the transit time of goods moving to Northern Quebec and Ontario to major centres or vice versa,” stated owner Martin Roy.