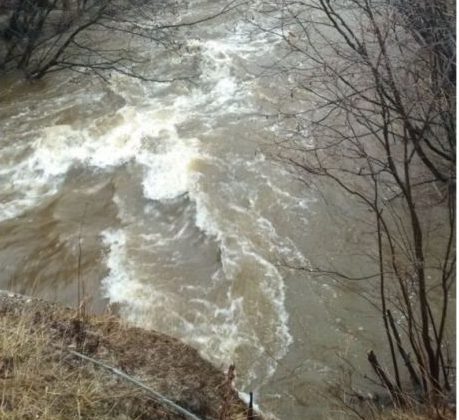 A flood warning has been issued for Chippewa Creek.

A water safety statement has been issued for the rest of the watershed.

Kurtis Romanchuk, NBMCA Duty Officer, says the Chippewa Creek water level gauge indicates that the creek rose about 1.1m over the span of an hour Monday night and was around 10cm above its top of bank level at the gauge location around 8 pm.

Officials say continued precipitation is possible Monday evening and overnight, as thunderstorms make their way across the area.

Another storm rolled through around 10:30 pm.

The agency says urbanized watercourses, including Chippewa Creek, may continue to rise. Watercourses in rural areas will respond more slowly but may show a water level increase over the coming hours or days.

“With the intense rain that was received, North Bay Fire is warning residents to use extreme caution or stay away from area creeks,” he says, pointing out another round of intense rain is in the forecast for Monday night.

Hundreds of customers were offline for a few hours in several areas including Ski Club Road, the Graniteville area, Seymour Street and Highway 17 East.

Updates can be found on the outages page on the North Bay Hydro website or on their social media channels too.