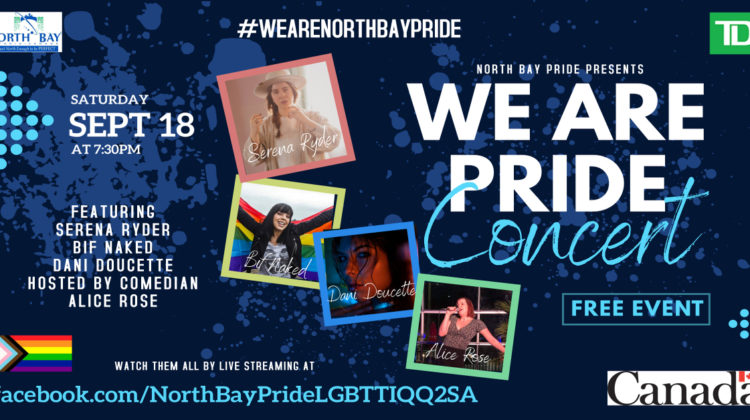 Jason Maclennan, Communications Director, says the first event is on Facebook at 7:30 pm on Sept 15.

“The goal was to have the federal leaders as they promised, but I guess they’re all scared of what may be asked unexpectedly, so they can’t prep for it, but the candidates have stepped up to the plate,” Maclennan says.

He points out North Bay Pride is accepting questions through messages on Facebook for the event.

“This is about questions that you’ve asked, it’s not questions that have been done by the media or what people think we want to know, it’s actually very specific questions about things that affect you.”

Friday’s event is the drag persona contest finals with a limited number of tickets available to the event at the Capitol Centre.

“You can pay what you can, we’re not asking people to pay exorbitant prices, you can choose what you can pay for the ticket.  There’s an audience for 200 people so I imagine it might sell out pretty quick,” Maclennan says.

On Saturday, an all-ages ‘We Are Pride Block Party’ goes from 2 pm to 6 pm in Cecil’s parking lot.

A screen will also be put up to watch the “We Are Pride Concert” which takes place inside the Capitol Centre that night.

The headliner is Serena Ryder with performances from Bif Naked and Dani Doucette.

Maclennan says a limited number of tickets are available for the concert, which will also be live streamed on Facebook.

For all the details check out North Bay Pride on Facebook.