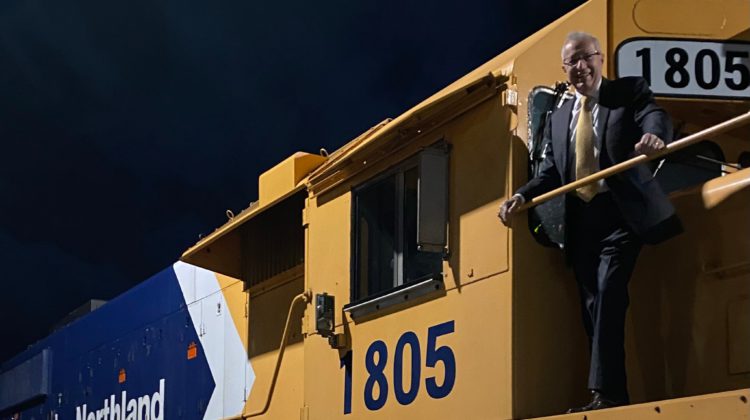 Ontario Northland is running a test train to Toronto.

Vic Fedeli, Nipissing MPP, posted on social media Monday morning that he was aboard the ‘The Northlander’ for its test-run to Toronto.

“They’re checking the times along the way,” says Fedeli from on board the test-train. “It’s also to evaluate the track conditions. We see them, the men and women from Ontario Northland up and down the cars, looking at the mile markers, they’re looking at the various stations. They’re working with Metrolinx, who have their people here as well.”

Fedeli says there weren’t any hiccups, but they did undertake a scheduled pull over to allow a freight train to go by.

“This is the CN track from North Bay to Toronto, so that was exciting. There’s a lot of people greeting us along the way at the various stations,” he says.

Fedeli says it’s almost poetic that they’re taking the test-train while there is bad weather along some parts of the train corridor.

“A blistering snowstorm as we’re taking the train in the warmth and comfort, we had a hot breakfast served to us at 6 o’clock, used my laptop and did a lot of work in the comfort of this,
while Highway 11 north of Latchford is closed because of weather,” he says.

On the return trip to North Bay, ONTC President and CEO Corina Moore told MyNorthBayNow.com the test run has been a success.

“100 percent. Our rail operations team is on board, they’re looking at the track infrastructure, we’re looking at transit times and the comfort of the ride. We are just thrilled with how it’s going,” she says.

The ONTC has previously said the goal is to see the return of passenger rail by the mid-2020s.

“We’ve certainly heard a lot of really good feedback as we always do from the northern municipalities and just the impact that this rail service will have in attracting tourism and economic development,” she says.

She says the business case will be provided to the government in early 2022.

Earlier this month, Caroline Mulroney, Ontario’s Minister of Transportation announced that Timmins would be the location of the northern terminus station.

Testing 1, 2, 3. 🚉Today we are operating a passenger train in between North Bay and Toronto for testing purposes. We are validating transit times as part of our ongoing work on the Northeastern Passenger Rail Service business case. pic.twitter.com/j58K7vnVrH

The test train has arrived at Union Station! 🎉

We all agree that it’s looking good, @OntNorthland 🚆

After a short break in Toronto, the train is headed back to North Bay! pic.twitter.com/1rTYv4vd9w