Province invests over $100M for manufacturing jobs in North Bay

Metrolinx and Ontario Northland have signed a contract valued at nearly $109 million dollars.

Vic Fedeli, Nipissing MPP,  says the new agreement will support jobs and economic growth in Northern Ontario and across the supply chain.  He adds it’s part of his government’s plan to build a stronger more resilient manufacturing sector in the north that will provide high quality and good-paying jobs.

“They have such superior quality here,” says Fedeli.  “I go back to the women and men of Ontario Northland, they put out an unbelievable product here that is second to none.  I think that was the tipping factor, the sheer doggedness of the men and women here under the great leadership at Ontario Northland.”

Corina Moore, CEO of Ontario Northland (pictured below),  says the continued partnership with Metrolinx confirms the company’s skill set and reputation for high-quality remanufacturing right here in North bay – adding the contract will also drive business to over 30 local suppliers.

She says getting this contract is a career highlight.

“I was working as the Chief Operating Officer when we lost this contract in 2011.  I didn’t think it was right then and I’ve always been fighting for it to come back, where we deserve it, back in North Bay for all the right reasons.   It’s probably a top 3 for me in this job, to bring this back to North Bay,” Moore says.

Officials say the refurbishment of the bi-level coaches will begin at the end of May and support approximately 100 manufacturing jobs for the next three years.

Both Moore and Fedeli were also asked for an update on the return of passenger rail to the northeast.

“Stay tuned,” they both said to reporters.

Moore added they’re working on the final pieces of the updated business case for the province. 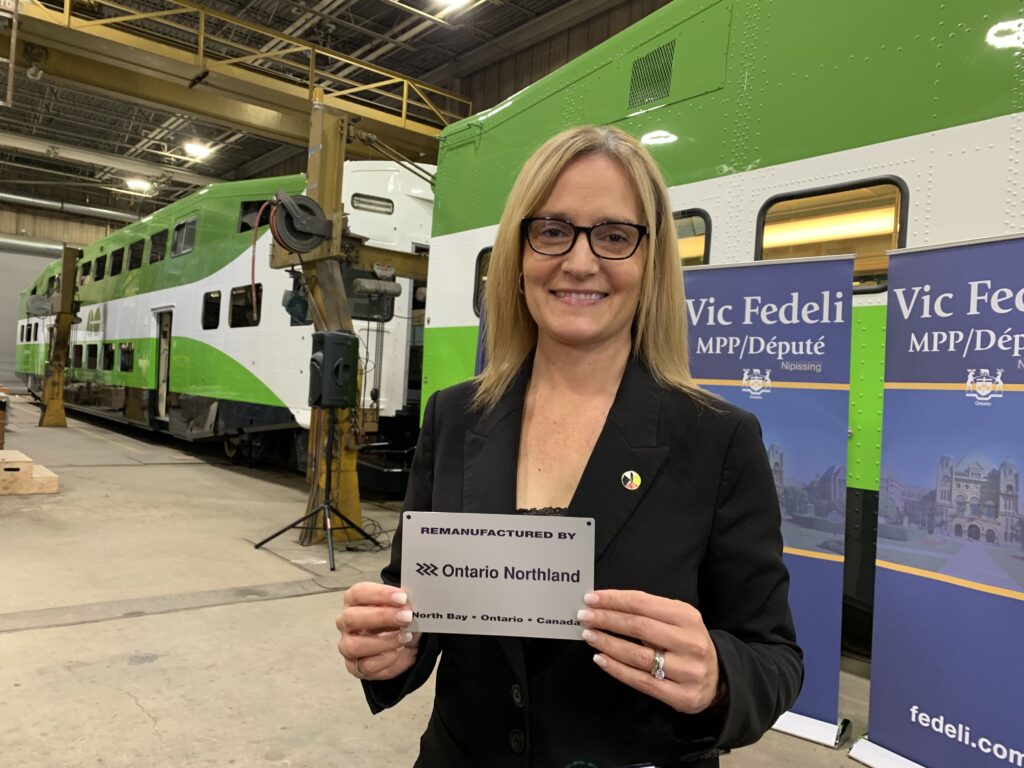 Corina Moore, CEO of Ontario Northland, holds up a placard that goes into each refurbished GO Transit rail coach. (Photo by MyNorthBayNow.com staff)