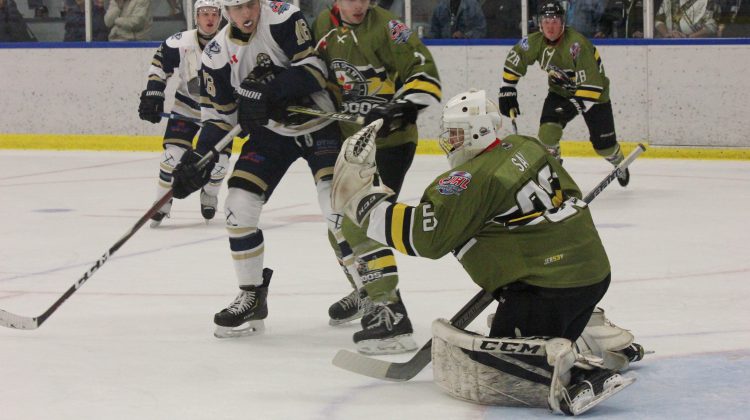 The Powassan Voodoos added two more to their winning streak this week with 4-2 and 7-2 victories over the Blind River Beavers and Kirkland Lake Gold Miners.

“The Blind River game was definitely a playoff atmosphere,” Voodoos head coach Max Gavin said shortly after the team got off the ice against the Gold Miners. “Both teams came in riding winning streaks and I thought it lived up to it. Very chippy, playoff feel early and it’s good for our guys to get into that early and that’s how it is going to be if we meet up down the road.”

Previously the Gold Miners were the only team to defeat the Voodoos so far in the early going, so the game would be a good measuring stick for Powassan to track their growth since then and judging by the score, passed with flying colours. With the two victories, Powassan’s streak is now up to nine wins.

Gavin also believes to have a playoff-like game early will be beneficial down the road, as some of these players are new to the NOJHL climate.

One of our many previous sit down chats had Gavin talking about depth on the team. This past week the Voodoos earned its fourth weekly star in five weeks, and fourth different player to receive the award in Gregory Trudeau-Paquet. 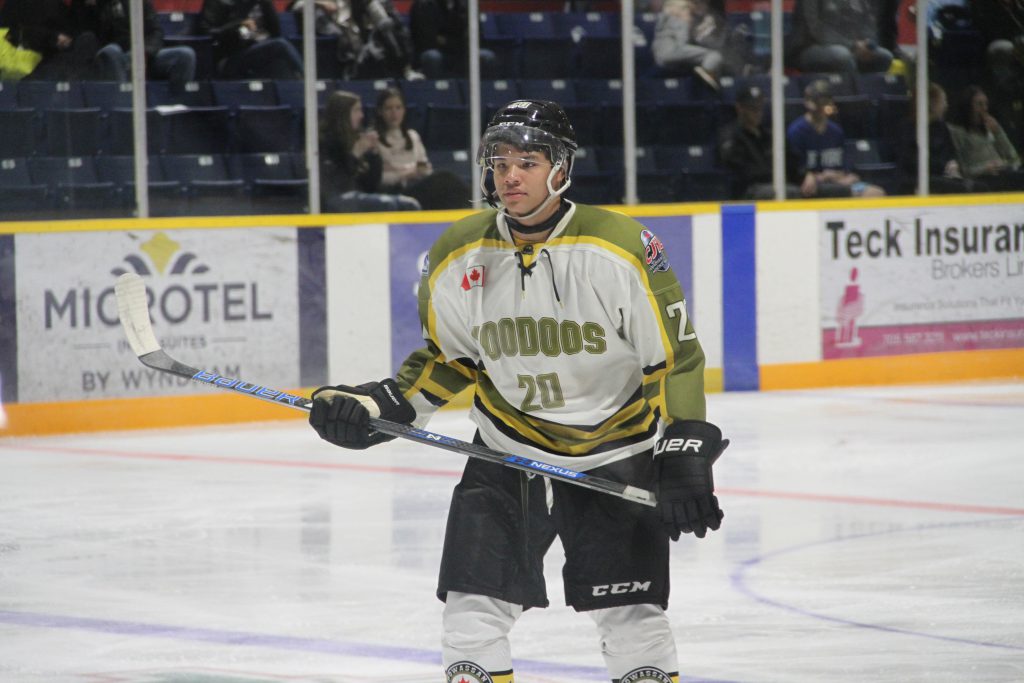 Gregory Trudeau-Paquet has been named an NOJHL weekly star. (Supplied by Powassan Voodoos)

“I was hoping that other guys would get the chance and I am glad that Greg did,” Max said. “He’s a workhorse out there, and all the guys are. We had a guy out for a suspension and a guy injured so now it is next up mentality and other guys have to step up and fill the roles of who is out. It’s great to see because the depth keeps going no matter what happens.”

Other Voodoos news for this past week is the team cracked the top 10 in the country on the CJHL’s top 20 list. Powassan now sits at #6, which is up from #11 last week. The other two NOJHL teams on the list are the Timmins Rock (14) and the Beavers (16).

“It’s nice but you don’t hand out awards in October,” Gavin said. “It’s cliché but you just keep working and if you do the right things now, it will pay off. It’s a testament to our guys and our staff. Our General Manager Chris (Dawson) just won his 250th game tonight so it is big on him for assembling the team and getting the horses here so credit to everyone in the organization for that.”

Next week sees Powassan travel to Sault Ste Marie, Michigan to partake in the annual NOJHL showcase. There the team will have a rematch with the Beavers and take on the Espanola Express.

“It’s exciting. We’re doing it in Soo Michigan this year so I think it is going to have a bigger opportunity to have more scouts there to have guys seen and more exposure for our league because there is a lot of talent here,” Gavin stated.

The next Voodoos home game isn’t until October 19th when the team takes on the Timmins Rock for the fifth annual “Pink in the Rink” night to support cancer research.

“As we know the road goes through the north,” Gavin explained. “In terms of Timmins, Hearst, Cochrane, KL, all those teams, they are usually the top ones that we are going to fight with on our side (the East Division). Timmins is having a strong year, they are well-coached and a hard-working team and I think we match up well and I am sure it is going to be fun for both sides.”