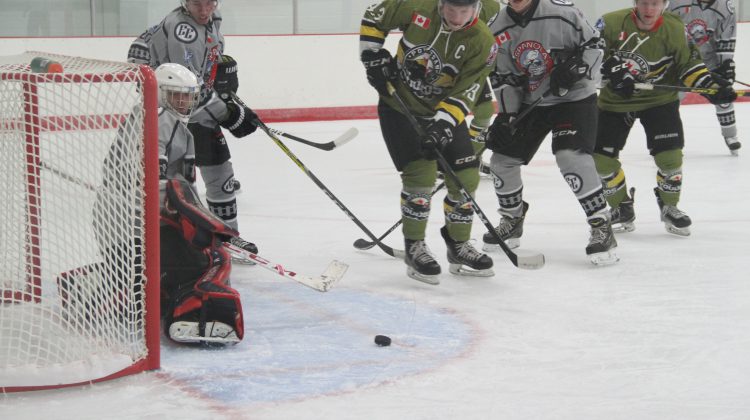 Voodoos and Express in action at the NOJHL Showcase. (supplied by the Powassan Voodoos)

It was another interesting week for the Powassan Voodoos. The Junior “A” club played two games, with both of them coming in Sault Ste Marie Michigan.

Both of those games did not come against the Soo Eagles as one would think, but instead against the Blind River Beavers and Espanola Express with 2-1 and 5-2 victories for the Voodoos respectively. The games were part of the annual NOJHL showcase, where the teams meet up so scouts can make a trip and get a look at players they might normally not get to see.

“The showcase was great,” Head Coach Max Gavin said. “I think having it in the States really paid off. I saw more scouts than last year and a lot more contact with people from different levels. I thought it went really well, the teams showed well and Soo Michigan did a nice job with hosting.”

The game against Blind River was a rematch from last week’s 4-2 victory for Powassan. The two teams had, until Timmins joined them recently, been the only NOJHL clubs in the CJHL’s top 20 rankings.

“It was a good close game like it was the first one,” Gavin explained. “I think on the Olympic size ice it was a tough adjustment for both teams but we got through it. There were new refs too from the US side. There were a lot of adjustments but it was a good game, hard-fought and as I think every time we play a top team, it’s going to come down to one goal.”

The game against Espanola marked the first time the two teams had faced off against each other this year.

“We didn’t start the way we wanted to for sure, and they came out with a game plan,” Gavin said. “I think after a big win, sometimes you can have a bit of a lull the next day but we got through the first 20 tied at one and then we took off.

“Kudos to the boys, it’s not easy to go to new rinks, playing on an Olympic one night and regular the next and playing on paper a top team, to a mid-pack team, it can be different. But I am really proud of the guys for how they played and the travel and everything that was new to them.”

The Showcase can be beneficial for a team, not just with the scout’s eyes on them but to spend time together as there would be a lot of bonding on a trip like that.

“They’re in the hotels together, they’re in the bus riding six hours in change, they’re eating meals together,” Max said. “It’s time for them to find out who the other guys are. Even for the staff too, we had our GM, our game-day operations guy, our new stats guy, our assistant GM, so we had a full bus of staff upfront as well. Sometimes we haven’t really had a chance to hang out either so we had a chance to get to know each other so it was great for the whole organization.”

Off the ice, the Voodoos keep climbing the ranks in the country as they have now broken into the top five in Canada for Junior hockey.

“It’s always nice to get mentioned in stuff like that, but that is all credit to the players, we just try to set them up for success,” Gavin said. “It’s not a championship, but it is nice to get those mentions.”

To climb as high as number one in the country to Gavin is definitely a feather in the cap, but a championship and giving the players more opportunities with hockey defines a successful season.

Coming up this week, the Voodoos take on the Timmins Rock, who is also ranked in the top 20 at number eight. The last time these two teams met, Powassan took the game in overtime.

“When you play someone for the first time, we don’t know them and they don’t know us,” Gavin explained. “Once you’re able to use video to dissect another team, then we can get into the fun part of trying to match up. Timmins is going to be a tough opponent. They are well-coached, they have a good organization, great players.

“I think they are very similar to us. As the coach of my team, going into a game I think we can win every game we go into but Timmins will be a tough out. I have a lot of respect for Corey Beer (Head coach of Timmins) so I enjoy going up against Timmins, and I know the boys are excited too.”

The game will be special too as it is Pink in the Rink night in Powassan.

“I think we have really nice pink jerseys,” Head Coach Max Gavin said. “Last year I was at the Eastern Canada Cup so I didn’t get to experience Pink in the Rink last year. I am excited to experience it. I know our team behind the scenes has been working very hard to make this a successful event and I think it is special.

“I think it is special that the league does it. I think it is great to raise awareness and great to raise money for a great cause. It adds a little bit extra for the game too, and I think it will be a heck of a hockey game and if there was a game for fans to come to, this would be the one I would suggest.”