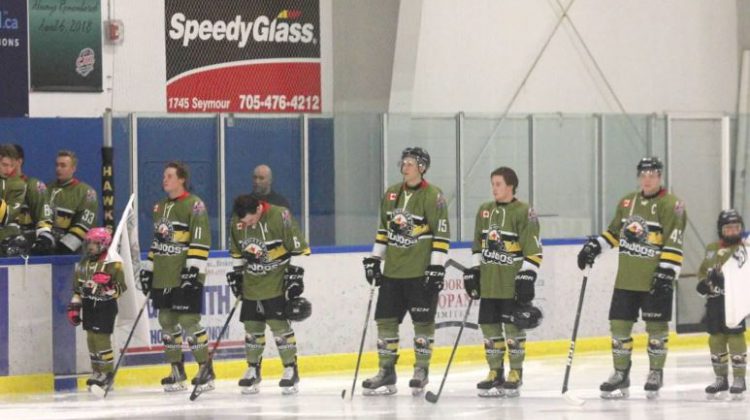 For the 17th straight game, the Powassan Voodoos have come away with a win.

This time, the Espanola Express fell victim to the Voodoos offensive prowess in a 7-1 game.

“When you go on the road, it’s tough,” Head coach Max Gavin said. “Long road trips, new arenas that some of the guys haven’t played in so you don’t know what to expect but the boys played hard and got the job done. Just keep things rolling and keep playing our game and the results will come.”

The first time the two teams met, Powassan skated away with a 5-2 victory in what was win 11 of this hot streak. That game took place in Sault Ste Marie, Michigan, as part of the annual NOJHL showcase.

Earlier this week, the Voodoos made a trade that gives them more depth upfront by acquiring Raf Praysner from the Soo Eagles for a player development fee. When you add another presence into a locker room, sometimes that can affect team chemistry, but that was a notion that Gavin quickly dismissed.

“We’re not moving anyone out at this point, we’re bringing a kid into the culture so I think it is a little different. One player shouldn’t dictate an entire team. We’re excited about Raf being here and we think he is fitting in really well. He is a veteran of the league, so the learning curve isn’t as big for him.”

“It’s about grasping our mentality, our culture and going out there and having fun. It’s not all going to be there the first game, so every day in practice he will pick up little things, every game playing a little more in our system and allowing his skills to come through.”

Praysner who is a dual citizen between Canada and the US has scored four goals to go along with five assists for nine points in 15 games so far with the Eagles. Last season he put up 14 goals and 19 assists for 33 points in 54 games.

“He’s very excited about the opportunity. I think he brings a lot of energy, I think he has some skill there as well and he adds to our forward depth and he will create a lot of competition in our lineup. One through 14, anyone can play anywhere and anyone can take anyone’s job so it is going to create healthy internal competition that will help drive us to another level.”

This coming week sees Powassan host two common foes, the Hearst Lumberjacks and Cochrane Crunch. The Voodoos last played host to these two teams in their last two home games, on October 25 and 26, and Gavin expects them to be tight and highly competitive games.

“Both Marc (Lafleur, Hearst coach) and Lenny (Ryan Leonard, Cochrane coach) are great coaches, and they have great teams,” Gavin explains. “I expect Hearst to come out firing, they have played really well lately and so has Cochrane. I think Cochrane has six wins in the last month, so they have been playing well.”

The game against the Crunch will also be a special one on Sunday as it will be Powassan’s annual Remembrance Day salute.

“It’s incredibly important to remember our veterans and what they sacrificed for us to be here, so I think it is an incredibly important game,” Max said. “Anytime you can recognize people that maybe don’t get the recognition they deserve, whether it is breast cancer, Movember, Remembrance Day, all are extremely important and we want to bring as much awareness as we can. We want those people to know that we are always supporting and always grateful for their sacrifices.”