Trudeau-Paquet once again a star 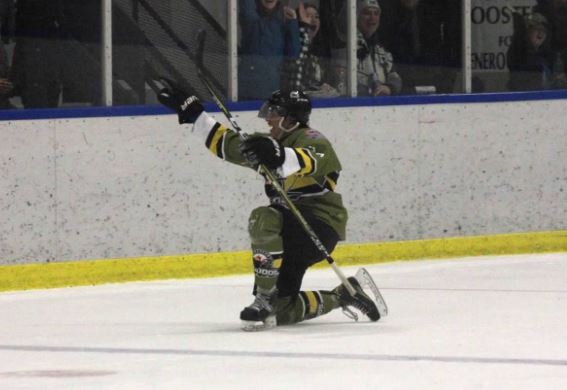 Greg Trudeau-Paquet celebrates a goal. (Supplied by the Powassan Voodoos)

For the third time this season, Greg Trudeau-Paquet of the Powassan Voodoos has been named one of the NOJHL’s three stars for the week.

In two games, a 4-1 victory over the French River Rapids and 14-5 dismantling of the Elliot Lake Wildcats, the 20-year-old Sudbury product picked up six points.

Against the Rapids, Trudeau-Paquet scored the game-winner and added an assist, while against Elliot Lake he scored his first hat trick of the season which was his third in the NOJHL. He also picked up an assist in that game.

With the four goals scored, Trudeau-Paquet is nine shy of 100 in the NOJHL.

In other Voodoos news, the team has once again cracked the top five of the weekly CJHL top 20 rankings as they sit at number five. Other teams representing the league are the Timmins Rock at number eight and the Blind River Beavers at 19.