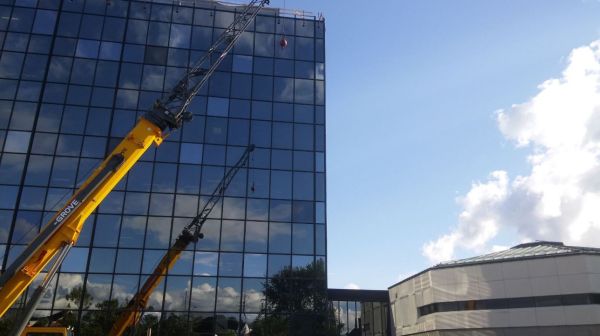 The rezoning of a property in West Ferris will go to a vote of North Bay City Council. (Stu Campaigne MyNorthBayNow.com staff)

Neighbours disputing a West Ferris rezoning application have had their points of contention answered, according to development consultant Leo DeLoyde.

DeLoyde represents 1670432 Ontario Ltd and Mark and Tammy Truchon, owners of a 47-acre swath of land located in the south end of North Bay that will be developed as an industrial park if the rezoning is approved.

At a meeting of the community services committee Tuesday, the application to rezone from “residential” to “general industrial” and “open space” was unanimously moved forward to a vote at the council level in two weeks’ time.

If the rezoning is granted by a majority of council, “We think it will be an asset to the community,” said DeLoyde.

At a public meeting two weeks ago, several nearby homeowners opposed to the industrial development spoke against the move. The land is abutted by Birchs Road and Legault Street and is within a few hundred metres of private residences with Lakeshore Drive addresses.

Beverly Hillier, the Manager of Planning & Building Services for the City of North Bay, presented a supplemental report to the committee outlining how the proponent had made concessions to appease the homeowners.

Committee Chair Johanne Brousseau said, “Staff did address the issue of site plan control…the rules are still there, they still must abide by the rules of the Ministry of the Environment and the North Bay-Mattawa Conservation Authority.”

DeLoyde says environmental concerns, worries about noise levels, and objections to blasting were some of the points raised at the public meeting his client has addressed. A proposal to restrict blasting in the proposed area to between 8:00 a.m. and 4:00 p.m. was raised during the meeting a consented to by the proponent.

Also to be rectified by the current owner is a snow dumping business referred to as “illegal,” in the supplemental report, and operating in defiance of by-laws on the subject property.

“In my experience, people try to convert industrial land to residential,” said DeLoyde following the vote. “This is an unusual application in that we’re going in the other direction. We see this as a natural, logical extension of Gateway Business Park, the extension of Legault to Birchs would produce the same kind of development that you see in that whole area.”

Mayor Al McDonald gave his full support to the project, satisfied with the efforts of the proponent to make things right with the neighbours.