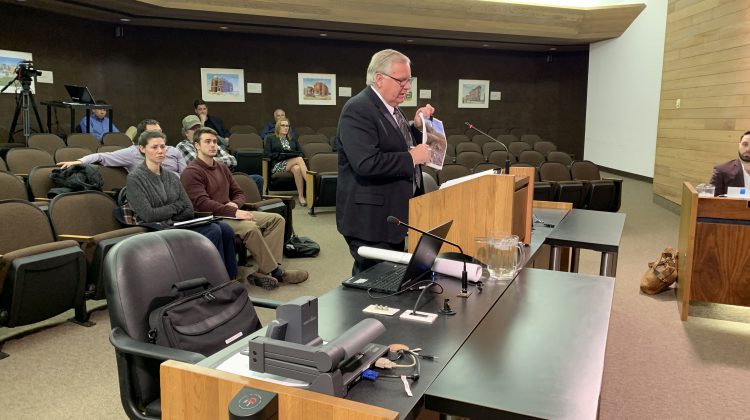 Leo DeLoyde of DeLoyde Development Solutions, explains to city council his client's proposal to turn residential land into industrial lots for development which will also include an environmental section for wildlife. (Rocco Frangione, MyNorthBayNow.com staff)

A numbered company in North Bay has to wait before city council approves its request to rezone residential land it owns to general industrial and open space.

However, council was unanimous in its decision to hold off on approving the application after about a dozen homeowners in the proposed area voiced concerns that the rezoning would create a lot of additional noise in the area as well as increased traffic with heavy vehicles.

There were also environmental concerns regarding questions on whether the rezoning would harm endangered species and wildlife in the area.

The land in question involves about 47 acres in the Birchs Road and Legault Street area and not too far from Lakeshore Drive.

The numbered company is 1670432 Ontario Limited.

In his presentation to council DeLoyde indicated the rezoned lots could accommodate both large employers and small incubator businesses.

Later in the meeting, he added the types of businesses would be light to medium-sized and that no manufacturing of products would take place outside meaning the level of noise would be greatly reduced.

After the meeting, DeLoyde said the residents had valid concerns about some of the operations.

“The owner has full control over that and is listening and is committed to addressing those concerns,” DeLoyde said.

DeLoyde said the proponent plans to dedicate a 4.7 hectare (11.6 acres) block of land to special wildlife and make that a permanent fixture so it’s preserved as part of the development.

During the meeting, DeLoyde told council the distance between the lots and people living on Lakeshore Drive is about 280 metres.

After the meeting, DeLoyde said this is a “fairly significant” separation.

However, he added the proponent is also looking at creating a tree buffer to further reduce the noise.

Residents and councillor Mark King also voiced concerns about the blasting that would have to occur to create the industrial lots.

The residents pointed out their homes have shaken when blasting in the area has taken place in the past.

DeLoyde said to minimize the blasting, the goal is to follow the natural configuration of the land when turning this into a road.

He added the blast times would comply with whatever the city requests assuming the land is rezoned.

A concern the residents had is the landowner is not complying with current standards in the area which made them wonder what the future holds if council approves the rezoning.

One resident who rose this point about compliance was Dave Wylie.

Wylie told council that although he doesn’t oppose the concept, he believes the “proposal is premature” and that council needs to be concerned about how the proposal affects property standards.

Wylie was one of several residents who asked the proposal to be put on hold until it was further investigated.

DeLoyde is taking this concern and other points the residents raised back to his client.

“We look forward to reviewing the concerns and finding creative ways of addressing the residents’ concerns going forward,” he said.

Assuming the land is rezoned, DeLoyde said the goal is to start developing the land this year as part of Phase 1 of the work with Phase 2 and more development to follow in 2021.

He said six acres have already been spoken for and other business people have expressed an interest in acquiring some of the land.