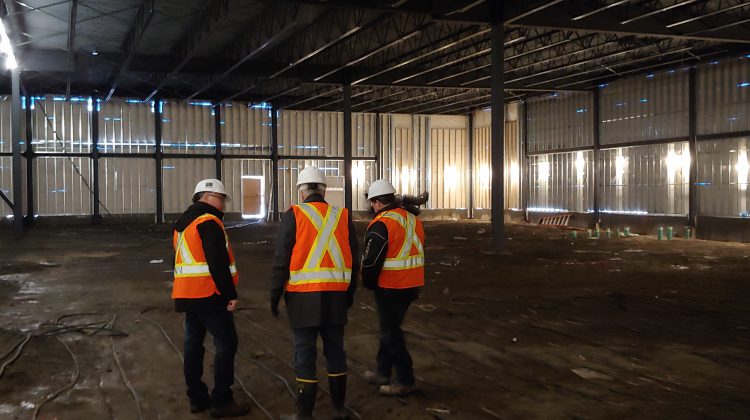 Officials stand in front of the future gaming floor of the Cascades Casino in North Bay. (Stu Campaigne, MyNorthBayNow.com staff)

It currently resembles an abandoned airport hangar but in less than six months, Gateway Casinos & Entertainment Limited plans to have its North Bay Cascades Casino staffed and up and running.

The staffing aspect is key in a city operating under the growth mandate of Mayor Al McDonald and North Bay City Council. Gateway’s Director, Communications & Public Affairs Rob Mitchell confirmed during a visit last week approximately 300 jobs would be created. The positions will be a mixture of part-time and full-time and Gateway intends the jobs to be filled by locals.

A July target to open the casino means the company will soon be seeking applications for the positions that run the gamut from card dealers to restaurant staff, security, custodial, accounting and more. Mitchell said announcements for job fairs and hiring dates are forthcoming. “The majority of our staff we’ll be hiring will be local folks.”

Construction officials said the winter has not presented any hiccups they haven’t seen before, but there are always challenges to building in cold temperatures. The next step is to pour the concrete floor. Once the floor is set, they say activity will ramp up quite a bit as they push through the spring, closer to the occupancy date.

Standing a few feet away from what will eventually be the gaming floor, Mitchell said, “We want to be able to get them in here and train them. We need to get possession of the building and get all the fixtures in and everything, and then, really run a boot camp for about six weeks to train everybody up before we open to the public.”

The new casino is a $31 million investment, spanning over 39,000 square feet, and will feature 300 slots and eight live table games. It will also be home to Gateway’s signature restaurant brands, The Buffet; and, MATCH Eatery & Public House.