Martone a weekly star for Powassan 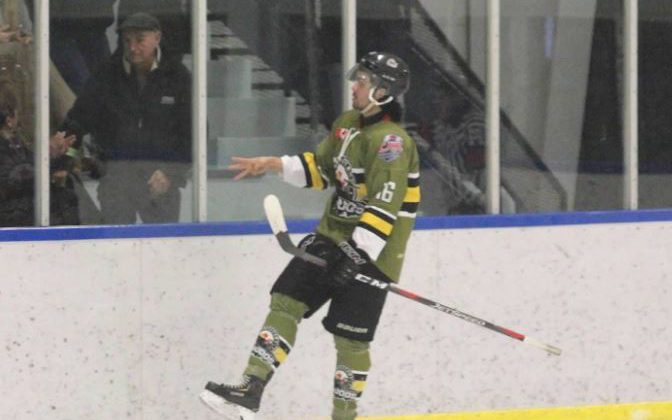 Seiji Martone acknowledges the crowd after scoring the shootout winner against French River in November. (Supplied by the Powassan Voodoos)

Seiji Martone has joined his teammates on the Powassan Voodoos by being named one of the NOJHL’s weekly stars.

The 20-year-old from Beaconsfield, Quebec, scored two goals, and six assists over the two games Powassan played over the weekend. In Friday’s tilt, a 9-3 victory over the Soo Eagles, Martone scored twice and added five assists, before picking up another assist in a 4-2 defeat to the Soo Thunderbirds on Saturday.

Seiji, who is entering his first full season with the Voodoos, has four goals and 17 assists for 21 points in 26 games. Last season he had eight goals and 14 assists for 22 points across 49 games split between the Cochrane Crunch and Powassan.

Over 75 NOJHL games, Martone has 12 goals to go along with 31 assists.

Martone has also been perfect in all three of his shootout attempts so far this season, with each shootout resulting in a Voodoos victory.

In other Voodoos news, the team continues its slide backward on the CJHL’s weekly top 20 rankings as they have fallen from the fifth spot to sixth this week. The Timmins Rock are the only other NOJHL team in the rankings, sitting at 19.